In 1954, the United Kingdom organized a conference on oil pollution which resulted in the adoption of the International Convention for the Prevention of Pollution of the Sea by Oil (OILPOL).

What is a Port Reception Facility? 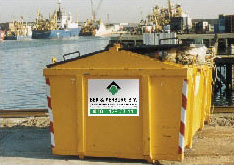 Port reception facility could vary from a bin or skip or container only suitable for non hazardous solid waste up till very sophisticated barges and trucks capable of handling different types of waste. In the larger ports there are also shore reception facilities available where large volumes (< 1.000 tonnes) can be discharged directly ashore.

A shore reception facility is accommodated to handle almost any type of waste and any quantity. Additional services such as cleaning, steam etc are available upon request.

Growth in the amount of oil being transported by sea and in the size of oil tankers was of particular concern and the Torrey Canyon disaster of 1967, in which 120,000 tonnes of oil was spilled, demonstrated the scale of the problem. Although the pollution that was the result of the Torrey Canyon running aground was not caused by operational discharge of waste to the sea the outcome of the actions taken after the disaster was the International Convention for the Prevention of Pollution from Ships, 1973, as modified by the Protocol of 1978 relating thereto (MARPOL 73/78).

As it became recognised that the environmental threat caused by routine operations such as the cleaning of oil cargo tanks and the disposal of engine room wastes - in tonnage terms a bigger menace than accidental pollution - MARPOL 73/78 covers not only accidental and operational oil pollution but also pollution by chemicals, goods in packaged form, sewage, garbage and air pollution. A short explanation of the provisions of MARPOL 73/78 can be found elsewhere on this website.

Convention The 1954 Convention, which was amended in 1962, 1969 and 1971, primarily addressed pollution resulting from routine tanker operations including the discharge of oily wastes from machinery spaces -  regarded as the major causes of oil pollution from ships. The 1954 OILPOL Convention, which came into force on 26 July 1958, attempted to tackle the problem of pollution of the seas by oil - defined as crude oil, fuel oil, heavy diesel oil and lubricating oil - in two ways: